The College recognizes the need to not only acknowledge the harm that has occurred within Indigenous populations throughout Canada because of colonization, but we also understand the need to deeply embed the knowledge of this history into the social work profession, so that it never again plays such a role in the future. For this to happen, strong relationships with Indigenous peoples and communities must be established so that Indigenous knowledge, perspectives and values are inherent within the work of the College and the social work profession in BC.We acknowledge that the office of the BC College of Social Workers is located on the traditional, ancestral and unceded territory of the xʷməθkʷəy̓əm (Musqueam people). Further, this acknowledgment, gratitude and respect extends to all the First Nations communities on whose traditional territories the BCCSW builds relationships and conducts business. You can read a more comprehensive acknowledgement here.

Through the recommendations  highlighted through the Towards Developing a Respectful Relationship initiative, the Board of Directors of BCCSW has approved an Indigenous Committee to form as a standing committee of the College.The Indigenous Committee seeks to reflect Indigenous values and Indigenous ways of working to provide a framework for engaging in College affairs.

The Committee acts in an advisory capacity to the BC College of Social Workers offering Indigenous cultural perspectives and knowledge as a way to culturally inform the development of: regulation, College policies, initiatives, projects and programs, communications and relationship building with Indigenous persons and communities. Where appropriate, the Committee is able provide the Board with clear recommendations including background information, perspectives considered, options considered and rationales. The Committee will also develop its own initiatives in order to reflect Indigenous values and Indigenous ways of working in College affairs.

My name is Jenny Morgan, I am from the Gitxsan First Nation. I was born in Terrace, grew up in Prince George, and been residing in Vancouver since 2001. I moved to the lower mainland to pursue my Bachelor’s degree in social work at UBC, graduating in 2003. I then attended UVic and obtained my Master’s in social work in 2014. I have since completed my Doctor of Education at UWO in 2018.

I previously served on the BCCSW Board from 2017-2018. It was a great experience, and since then I have remained a member of their Indigenous Committee in support of the work the college is focusing on with reconciliation with Indigenous peoples and communities. I am now in my second year of m 2019-2020 Board term.

My practice experience has included child protection social work, working in non-profit programs and management, and working in health care. More recently I have moved into leadership as the director for Indigenous health at the BC Women’s and Children’s hospitals, and teaching as a sessional instructor at the UBC School of Social Work.

Wendy is grateful for the opportunity to work and live as an uninvited guest on the unceded and occupied traditional territories of the Musqueam, Squamish and Tsleil-Waututh First Nations. As a proud Haida/Hotinonshonni woman, Wendy’s work as an educator and social worker has been informed by her traditional name/role which is Lightning Eagle Woman. As the Eagle that sits atop of the tree and sees the storms coming, Wendy carries the responsibility of warning and protecting the people. Currently, Wendy works within her community as the Dean of Student Services and Registrar at NEC Native Education College.  She locates her social work practice in the transformative space where community, education, and culture intersect.

Hello my name is Sandra Wilson, I am originally from Kispiox BC, the Gitxsan territory, and I belong to the wolf clan. I graduated from the University of Northern BC with my Bachelor’s degree in Social Work in 2008, and have been working for Prince George Carrier Sekani Family Services (CSFS), a Delegated Aboriginal organization, since 2008.  I began my career in social work as a front line guardianship social worker from 2008-2014, at which time I was assigned the guardianship team leader position in 2014 with CSFS. I am very passionate about my work in the social work field and my commitment to my guardianship team, and the 11 Carrier nation’s CSFS serves. My passion as a first nation’s woman is to ensure better outcomes for our children & youth in care, as they are our future leaders.

My name is Melanie Lansall and I am from the Tsay Keh Dene Nation in Northern BC having grown up in Mackenzie, BC

I graduated from UNBC in 2006 with my Bachelor of Social Work degree with a specialization in First Nations, I then returned in 2007 to be a part of a provincial recruitment program for Ministry of Children and Family Development as an Indigenous Social Worker in child protection. I have both protection and guardianship experience that helped inform my knowledge of systems and how they impact Indigenous families.

I worked in a hospital setting in various mental health and treatment positions. I found my passion in providing community mental health and crisis response work. I have worked in and out of this area since 2006, and decided by 2010 to embark on following that role. In the past I have volunteered with the Prince George Urban Aboriginal Justice Society as well as the Central Interior Native Health Society. Each opportunity has helped to inform my practice and how to provide services in a rural setting.  My expertise has been bridging the gaps in services in rural and urban perspectives. I often travel to provide mental health and wellness services.

In 2011, I  began to follow my dream to one day have my own practice and with hard work, I achieved this dream.  I currently work from my private practice Dzoondza Wellness and also as a part- time instructor at UNBC.

In 2014 I obtained my Master of Social Work degree.

I hope to study for the Registered Clinical Social Worker registration and move towards my dream of achieving my PhD in health sciences.

I believe in being the change you wish to see in the world and advocate to provide supportive services where possible. 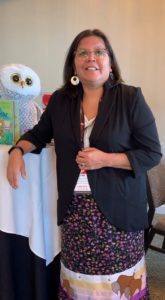 My name is Lynn Duck Chief, I am a member of the Adams Lake Band of the Secwepemc Nation.  I have 3 wonderful children with my loving husband Craig.

I’ve been working in the social work field for 24 years. Currently I work in the Kamloops School District.  I’m also a member of the BC Native Women’s Association as Vice President.

I look forward to the experience on the BCCSW Indigenous Committee.

Ferne Strain, BSW, MSW, RSW is Metis/Cree on her paternal side, and French/English on her maternal side. Ferne’s Metis and Cree ancestors are from northern Alberta, more specifically, the Lac La Biche area.  Currently, Ferne resides on the traditional and unceded territory of the Tk’emlups te Secwepemc people.

Ferne grew up in Golden, BC which was challenging as there was not many Metis people there. She struggled in high school and did not complete grade 12. For many years, Ferne worked as a waitress and raised her children. She finally felt enough strength to tackle grade 12 while in her early thirties. Ferne learned at college if she worked hard, she could go forward in the social work program. Ferne now feels that her years in the social work program corrected a lot of misconceptions she had about her self and where she fit in the world. Ferne learned about colonization, racism and oppression and how herself and her ancestors had been impacted. Ferne feels completing her Bachelor of Social Work program changed her life in many ways and gave her opportunities she could not have imagined.

Ferne has now been working in the social work field eighteen years in various roles. She has worked as a guardianship worker in child welfare for five years. Currently, Ferne has been working for the BC Government for fourteen years as a child and youth mental health clinician. Ferne also manages her own private practice, Compassionate Counselling, where she sees adults, children and youth.  Ferne’s expertise is working with children and youth that are struggling with mental health issues.

Ferne has been a volunteer on the board for the Metis Commission for Children & Families of BC since 2014. During her time at the Metis Commission for Children and Families of B.C., she has served in various roles such as the president, treasurer and member at large.  This has been a great experience to for Ferne to help support Metis children’s cultural safety through helping to develop policies at an agency level, create strategic planning for the agency and have discussions at the provincial level.  This experience has led to Ferne gaining knowledge about board governance, Metis values, working with diverse groups, intergenerational trauma, Metis history and that “family is culture”.

As a Metis -Cree person, Ferne is passionate about educating society about Indigenous history, inequalities, the impact of colonization and systematic racism in Canada. Ferne feels this opportunity to volunteer as a board member on the Indigenous stream of the BC College of Social Workers well enhance her ability to give back to the social work community.

Olivia Palomino-Meraz was born in South-Western Mexico and is a member of the Cora Indians of Nayarit. Her maternal lineage is Central Mexico and her paternal lineage is Northwestern Indigenous. Olivia immigrated to Kahnawake Mohawk Territory (Montreal) in 1985 and in 1988 moved and has resided as a guest on Tsleil-Waututh, Musqueam, and Squamish territory. Olivia completed her Master’s Degree in Social Work on Unceded Musqueam Territory at the University of British Columbia in 2017 where she focused her graduation project on the impact of the overall health of Indigenous women who were forced to “evacuate” their home communities to give birth in urban centers.

From 2018-2019 Olivia worked as the Indigenous Complex Care social worker with Indigenous Health and BC Women’s and Children’s Hospital. Prior to her commencement in this role Olivia worked as a community counsellor for the Heartwood Treatment Centre, Stopping the Violence Counsellor for women in the DTES and has a private practice in Vancouver where she specializes in trauma counselling and complex grief focusing on women’s health and Indigenous complex care. ​

Currently, Olivia is the Coordinator for Indigenous Cultural Safety for Providence Health. Olivia also has her own private practice and is a registered MSW counsellor with FNHA and CVAP services in BC. She is active on the Indigenous committee for the BC College of Social Work. Olivia loves kickboxing, long walks through the city with her dog Eko and strong coffee. Gracias. 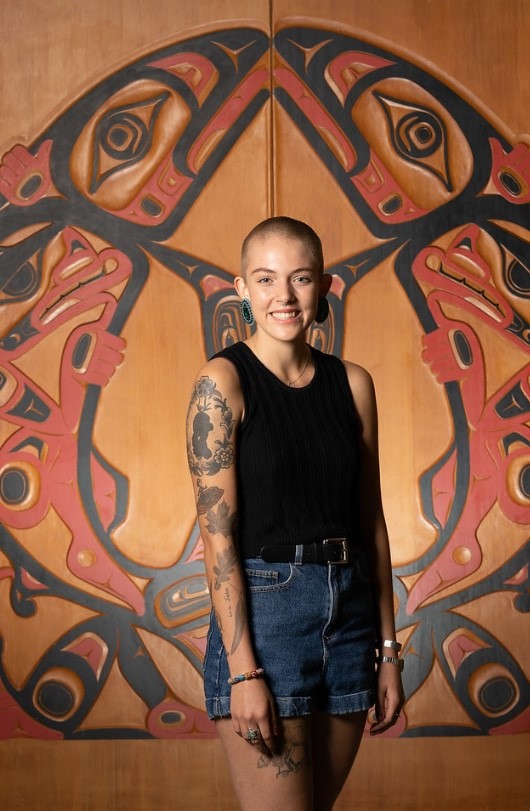 Hailey is Nehiyaw (Cree) from Peguis First Nation, Treaty One, on her mother’s side with mixed European ancestry on her father’s side. She was born on Ktunaxa and Sinixt territory in BC’s interior and grew up in central Texas. Hailey came to stolen Coast Salish territory to study social work at UBC, completing her BSW in 2020. As a guest on this land, she tries to be a good relative and support local Nations through activism and learning local languages and creation stories. Hailey’s passion for Indigenous-based research and land-based practices led her to her current position as a youth worker in the Downtown Eastside with the Environmental Youth Alliance.